Vox Telecom, one of South Africa’s largest independent voice and data service providers, asked DUO to take on a growing online marketing portfolio for them. 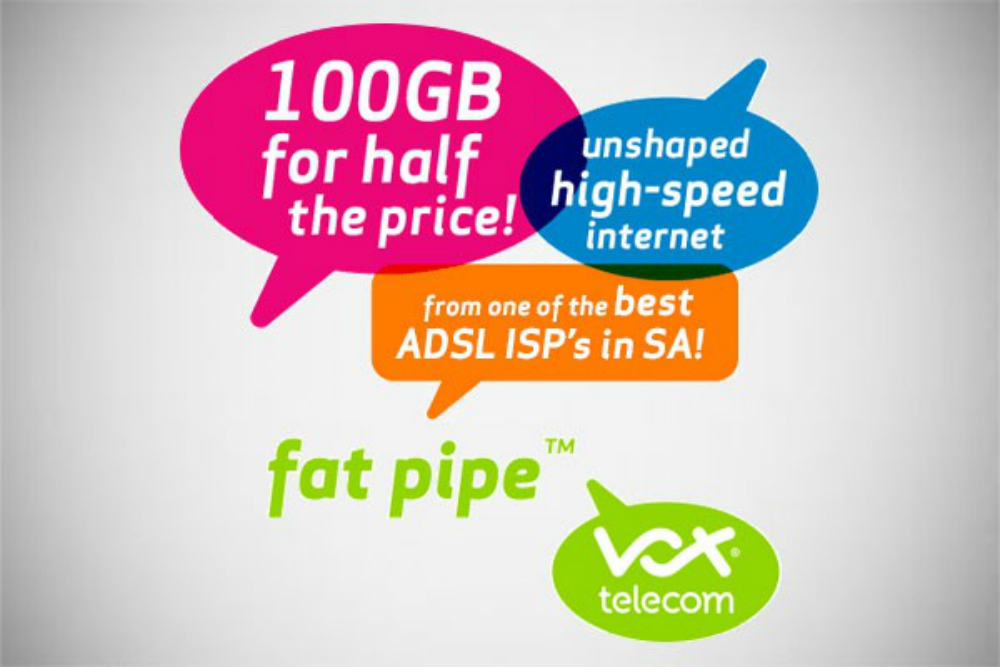 Prompted by news that Vox Telecom had been recognised as one of the top ISPs in the country, in terms of line quality and speed, an Integrated Digital  Fat Pipe 100GB promo was created.

The campaign was aimed at the end-user / home-user with the objective of driving online transactions through the Vox Telecom website, and to create interest in and an expectation of specials, promotions and giveaways by end users - new and existing.

Vox Telecom’s challenge was to achieve:

In order to fulfil these challenges, DUO aimed to:

It was decided that a campaign based approach would be utilised.  Each campaign was designed with an outcome or call to action in mind eg. buy now, learn more, subscribe here.

These were managed as integrated campaigns that leveraged PR, internal communications, marketing, external engagement and advertising.

We needed to launch everything at the same time - from banners to a press announcement, to Facebook advertising and a website go-live. It was an orchestrated effort and was delivered via a fully integrated approach that included:

Our first fully fledged campaign was kicked off to coincide with MyBroadband’s survey that positioned Vox Telecom as the number one broadband provider for line quality and speed.  It also coincided with a growing and continued media interest in the cost of connectivity for end users / consumers.

We were aiming for the 800 mark, not overly optimistically, because previous sales only reached 297 or so.  In the first seven days we exceeded this figure and by the end of the campaign we had achieved more than 2 700 sales of the Fat Pipe product for Vox Telecom.

We were able to track good buying days versus good media days, and were also able to identify MyBroadband as a mobiliser of sales.  This was a result of including a tracking link into the press release.  MyBroadband, on the day that it published our editorial, drove more than 300 sales in one day.

With the government now firmly focused on economic recovery, with planned infrastructure spend and job creation top of mind, there is renewed emphasis on skills development and community upliftment. Yet key to this recovery and [...]

Black Friday: How your business can survive the ‘Pandemic Edition’

Black Friday 2020. It’s a date that, in the past, would herald long queues, close confines and fights over discounted television sets and kitchenware. Today, this picture needs to be framed by social distancing, masks, [...]